After literal decades where Sony wouldn’t so much as prod the PC platform with a stick, we saw not one, but two big PlayStation 4 exclusives launch on PC: Death Stranding and Horizon: Zero Dawn. Both of these titles are powered by the Decima Engine, the technical showcase that Guerilla Games wowed us with back in 2017. Back then, Horizon: Zero Dawn was acclaimed as one of the best-looking open world titles ever, on any platform, and a testament to what first-party developers can achieve when they make the most of Sony’s hardware.

Death Stranding, the more recent of the two Decima engine games was ported to PC earlier. It built on Horizon: Zero Dawn’s open world chops and excellent character animation. It was also one of the best-optimized titles on PC in 2020. To top things off, it featured an implementation of NVIDIA’s DLSS AI-based upscaling technology that looked better than native 4K with TAA.

Considering that Death Stranding was one of the finest PC ports we’ve seen in a while, expectations have been pretty high for Horizon: Zero Dawn on PC, especially since the two share a common engine. How well has Horizon: Zero Dawn transitioned to PC? How do PC users gain relative to the PlayStation 4 Pro code? Let’s take a look and find out.

Like Death Stranding, Horizon: Zero Dawn’s minimum and recommended specs are quite forgiving. What’s interesting is how the minimum  and recommended graphics cards are all in roughly the same performance tier.

Guerilla Games claims that the recommended specs are for a 1080p/60 FPS experience with the “original” settings preset selected. Relative to a lot of newer games, these are very forgiving specs, with the exception of that 100GB storage requirement. It’s nice to see the Sandy Bridge i5-2500K still hanging in there  after close to a decade. Even the recommended CPUs, the Ryzen 5 1500X and Core i7-4770K are lower midrange at this point.

There’s a very small performance delta between the minimum and recommended GPUs here. The R9 290, for instance, regularly hands in frame rates within 10 percent of the RX 580. The VRAM gap is more pronounced, however. This tells us that if you’re running a 4GB card, even a lower-tier one like the RX 570, you won’t have to drop all settings to “Favor Performance.” Just drop textures a notch and you should be good to go. We experienced excellent performance all around: if you have a higher-end system like our GeForce RTX 2070 SUPER and Ryzen 9 3900X combo, you should easily hit 60 FPS at 1440p, and 4K is possible with just a bit of tweaking. The image quality settings that we’ll talk about, notably “Adaptive Performance” help a lot here.

Graphics settings: a decent amount of headroom for tweaking

Horizon: Zero Dawn offers a decent number of graphics settings to tweak in order to eke out better perform or exceed the visual standard of the PlayStation version of the game.

As a reminder, the PS4 Pro gave users two options. One of them allowed for better resolution and the other better performance. For the purpose of this comparison, we have only considered the resolution mode which runs the game at checkerboard 4K resolution at a stable 30 fps. We analysed the PS4 Pro’s performance by taking some sample scenes from the game and running it through trdrop, an open source software. Note that this tool gives us a mere demonstration of the game’s performance, because an exact 1:1 representation of performance can only be provided by the developers themselves since they have access to vast of array of tools and profilers.

Interestingly, Horizon: Zero Dawn on PC features switches out “medium” presets for “original,” which appears to be a close match for the PlayStation 4 Pro edition of the game. This is one of those cases where medium (or “original” in this case) isn’t necessarily a bad thing. Drop all those settings to original and you get the PlayStation 4 Pro experience with headroom for higher framerates and a higher resolution output. The other setting presets also have slightly different names. Instead of Low you have “Favour performance,” and High and Ultra are replaced by “Favour Quality” and “Ultimate” respectively.

As mentioned, “Original” equates to the original PlayStation 4 version of the game and there are two entire quality presets above that push the boat out on PC. Apart from the graphics settings themselves, there are a number of Display settings players can tweak to adjust image quality to their liking. These include:

And there are display settings which you can tweak which include:

Preset is self-explanatory. Adjust the preset changes all other graphics settings to the desired preset. If you just want a PlayStation 4-equivalent experience, drop this to “original” and you’re good to go, and you’ll have a healthy amount of performance headroom to boot.

Texture quality is a setting you’ll want to tweak if you have a graphics card with 4GB of VRAM or less. Cards like the 4GB GTX 1050 can benefit from the “Favour Performance” setting if you experience stuttering. If you have a 6GB or 8GB graphics card, you should easily be able to enable “Ultimate.” As this isn’t a from the ground-up graphics overhaul for PC, actual texture quality isn’t a big step above the PlayStation code, even on the higher settings. Instead, higher texture setting levels cache more textures on VRAM, meaning less texture pop-in, important when paired with PC’s higher draw distance.

Model Quality adjusts the geometric complexity of meshes in-game and also the distance at which LODs kick in. Horizon: Zero Dawn featured some of the most accomplished main character models we’ve seen this entire generation. This means that, even at “Original,” geometry looks incredible. At higher settings, high-poly meshes are pushed further out into the background. If you’re running the game at a native 4K, “Favor Quality” or “Ultimate” can add a significant amount of detail in the distance, though at the expense of a substantial performance hit.

Shadows and Reflections: These two settings adjust the resolution of shadows and reflections and how far out they’re rendered. At lower settings, you see fewer screen-space reflections, with a lower resolution overall. Original quality shadows don’t exactly look bad. However, if you want fine shadow filtering  and distant shadow LODs, you’ll want to enable “Ultimate.”

Anti-aliasing allows you to select between the game’s accomplished TAA filtering, with relatively low blur and excellent coverage, camera-based AA, FXAA, SMAA, or to simply disable it. The game claims that camera-based AA looks the best. However, we found that TAA, together with a sharpening pass with Image Sharpening in the NVIDIA control panel offered excellent AA coverage and optimal image quality.

Motion blur has a single off/on toggle and enables or disables the game’s camera-based and object-based motion blur. 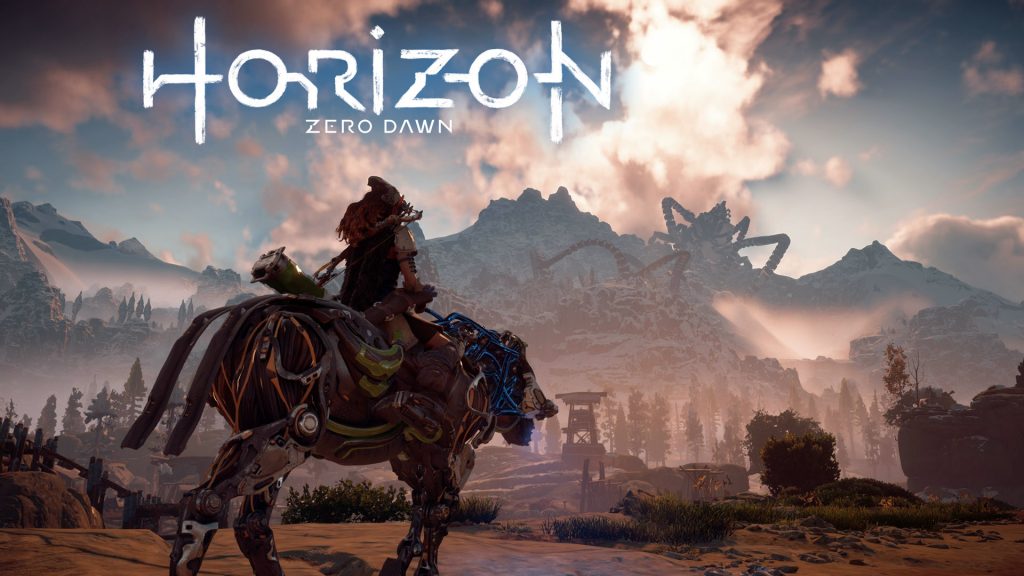 Apart from the actual graphics settings, Horizon: Zero Dawn has a number of Display settings you can adjust to get performance just right. Resolution is, obviously, a biggie. It’s ideal to run the game at your native display resolution. However, dropping this down can help, though you could just use the included “render scale” option to do this in-engine. It’s important to note that Horizon: Zero Dawn supports ultra wide resolutions, so if you have a 21:9 display, the game should work out of the box.

Field of view adjusts the game’s FOV. A higher FOV presents more of the game world than the rather compressed console-friendly field of view on the PlayStation 4. However, more of the world is rendered at higher FOVs so there is a bit of performance impact. We suggest leaving this at default or increasing it a bit if you sit close to the monitor.

Render scale, adaptive performance, and FPS limit all work together to help you nail down a consistent level of performance. Unfortunately, the adaptive performance implementation doesn’t work well right now — it can drop your pixel count by over 75 percent in certain cases. Render scale lets you reduce the maximum resolution. Dropping down to 0.9 can give you a notable performance boost with a negligible hit to image quality. FPS limit lets you manually limit the frame rate. Again, this feature doesn’t seem to work right with the launch code. We suggest using a third-party FPS limiter like RTSS instead.

Horizon: Zero Dawn offers a double-buffered V-Sync option. We suggest leaving this disabled and enabling adaptive V-Sync with triple-buffering through your GPU control panel if you want a relatively stutter-free experience. RTSS scanline sync is another welcome alternative.

Horizon: Zero Dawn’s excellent HDR implementation does make its way over to PC. You might have some trouble with Windows 10’s HDR settings. However, once you get things to work, the game looks stunning on displays with proper HDR support.

All in all, we’re happy with Horizon: Zero Dawn’s PC port. While performance isn’t quite where it should be — especially in comparison to Death Stranding, it’s great to just have this excellent first-party title on PC at all. Native support for ultra wide monitors is a big plus. And while performance issues and some broken settings are problems, this is a far better day-one experience than Red Dead Redemption 2, for instance.