Of the several PS4 exclusives releasing this year, Marvel’s Iron Man VR from Camouflaj is perhaps the odd one out. It’s a VR title and, unlike what initial trailers might have conveyed, is a full-fledged experience and not a rail shooter. Significant effort has also been made to ensure that the player – wait for it – feels like Iron Man. With the game having gone gold and set to release on July 3rd, let’s take a look at ten things you should know before picking it up.

Based on Marvel Comics’ Iron Man

Iron Man has been a pretty dominant part of global culture for the past decade or so, especially with the box office success of Marvel Cinematic Universe. Marvel’s Iron Man VR, however, won’t have any ties to the movies. It’s based on the comic book version of the character, somewhat like Square Enix’s upcoming Marvel’s Avengers. Which Tony Stark will we be getting though? The more egotistical, destructive persona from Superior Iron Man? The AI techno-ghost? Thankfully, this seems to be the regular old witty and charming Tony Stark that we know and love and who totally won’t betray everyone when the Civil War eventually rolls around. Hopefully.

Though this Iron Man is based off of the Marvel Comics version, the story itself is completely original. It follows Tony Stark after he’s stopped creating weapons and established himself as Iron Man. However, the past soon catches up to him when hacktivist Ghost appears and starts using his old weapons against him. For some reason, Ghost is attacking different Stark office locations worldwide and it’s up to Iron Man to stop her. As per the official Marvel.com listing for the game, Stark will encounter “iconic allies and super villains”. We’ve already seen Nick Fury and the iconic SHIELD helicarrier but expect more familiar faces to pop up throughout the story. What separates Marvel’s Iron Man VR from most other titles with the Armored Avenger? If the name didn’t give it away, it’s only playable in VR. Furthermore it’s exclusive to the PlayStation VR on PS4 with Sony publishing the title. There’s no Oculus Quest or HTC Vive version (at least none in the works or planned currently) – if you want to play the game, you need PlayStation VR (along with the PlayStation Camera and two PlayStation Move controllers, of course). Flying here works more or less like how the movies portray it. You hold the Move controllers in the designated position (placing them behind you will push forward, while holding them down while send you up) and press the corresponding buttons to activate thrust. Double-trapping the buttons activates the boost for speedier travel. It’s not too difficult to get into but based on demo impressions, it can take some time to make finer movements and change one’s elevation. You’ll also need to get used to alternating between flying and combat, though there is a button for hovering in place while you fight. Combat is a lot more straightforward than flying, thankfully. Pressing the Move button will fire a blast from Iron Man’s Repulsors to shoot down foes. You can also simply punch enemies by actually swinging your fist. This will cause Iron Man to move towards the closest foe and hit them with a lock on melee attack. You can also unleash the Unibeam after it’s charged by holding Triangle on the left Move controller and Square on the right Move controller. Nothing too crazy or complicated – it’s easy enough to get into and there’s enough room to experiment as you fly around, shooting down foes and punching them in the gob. The overall flow of combat has been purposed with VR in mind so you’ll be doing things that Iron Man would actually do using motion controls as opposed to pressing buttons. 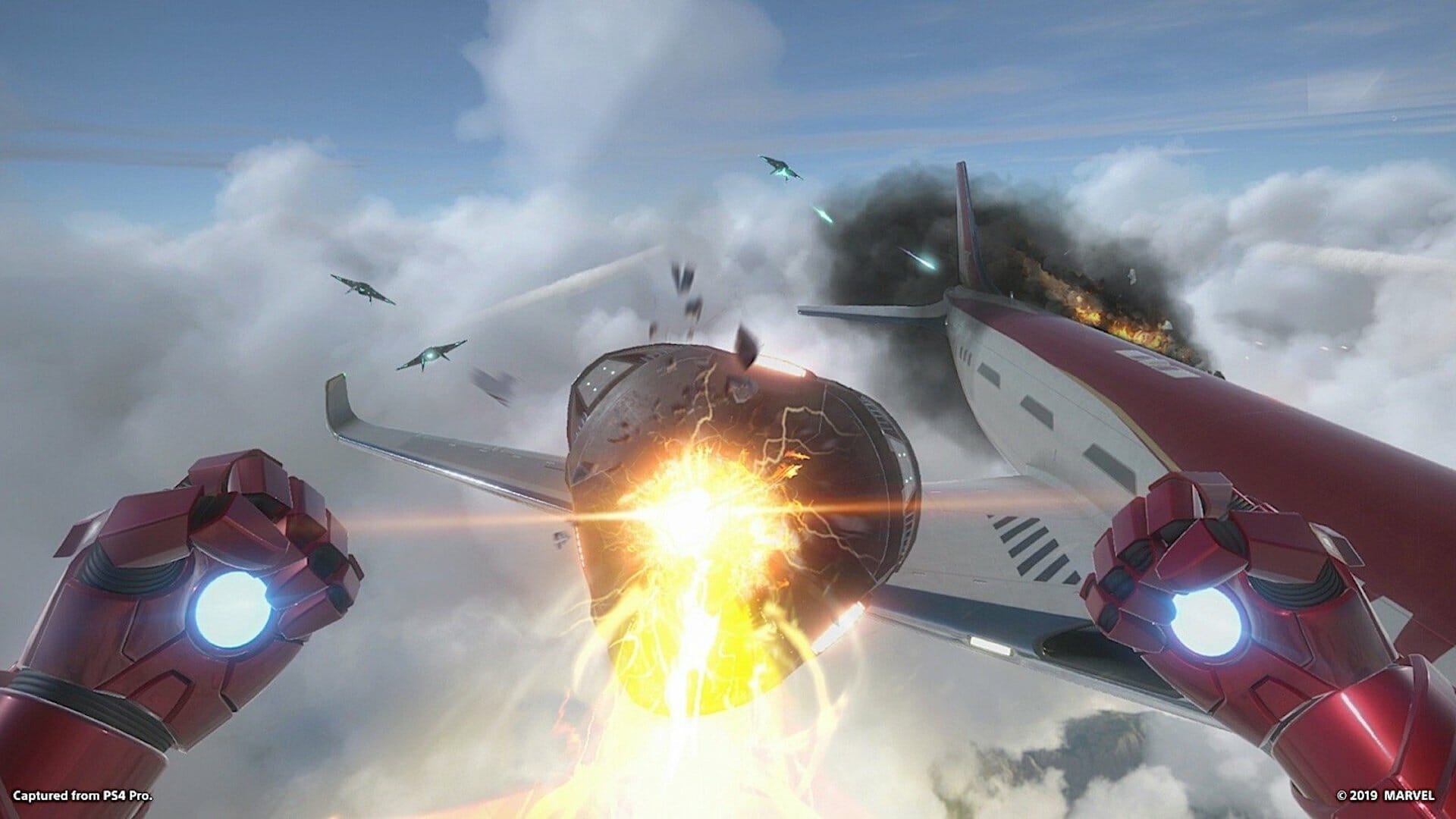 After completing the tutorial mission in the demo, you’ll play the first story mission which takes place in Stark’s private jet. Things quickly take a turn though as drones suddenly attack. You’ll don the Iron Man suit to fight them off but there’s more than just flying and shooting involved. The plane will suffer damage and you’ll need to extinguish its flames. A wing will need to be repaired, which necessitates physically pulling a metal bar off of a flap. The landing gear also needs to be freed, which is done by positioning yourself under the plane and physically pulling open the doors. The mission also ends with Tony flying up to the landing gear and saving Pepper Potts. There’s a nice bit variety and it should be interesting to see what later missions serve up (especially the one involving an attack on SHIELD’s helicarrier). Along with main missions, Iron Man VR also offers optional missions like the Flight Challenge and Advanced Combat Challenge seen in the demo. The combat challenges are especially intriguing because they feature larger environments and provide “more breadth” to the experience as per game director Ryan Payton in an interview with IGN. They’re also useful for unlocking Research Points which go into upgrading Stark’s suit. Tony Stark’s garage is the area for applying upgrades and receiving new abilities courtesy of Research Points. It can be explored in first person mode, thus allowing you to get a better look at the Iron Man suit itself. You can upgrade certain elements to “go faster” as per Payton (perhaps resulting in faster flight speeds and boosting for longer periods of time) and also upgrade the heads-up display. It’s also possible to unlock some new weapons like missiles, which are equipped by moving the controller down during combat.

No Button Remapping (For Now) Along with the visual quality – which isn’t the sharpest – one worrying thing about the game is button remapping or at least the lack of it. It’s currently not possible to remap buttons in the demo. This wouldn’t necessarily be a problem but Iron Man VR’s set-up is fairly unique. So if you’re used to certain buttons corresponding to certain actions, you’ll need some time to adjust. While Camouflaj could patch this on launch day or shortly after, it’s still worth trying out the demo to see how intuitive the current control set-up is. It wouldn’t be an Iron Man game without alternate armor skins. Completing the demo will provide the Molten Lava Armor Deco skin for use in the full game. Pre-ordering any version will provide the Original Armor, Vintage, Centurion and Ultraviolet skins for free while the Digital Deluxe Edition offers the Golden Avenger, Black Centurion, Sun Stinger and Stealth Armor skins. It’s not clear if there are many alternate skins, color schemes or additional suits to unlock in-game (a la Spider-Man) but we can certainly hope that’s the case.

The owner of this website is a participant in the Amazon Services LLC Associates Program, an affiliate advertising program designed to provide a means for sites to earn advertising fees by advertising and linking to Amazon properties including, but not limited to, amazon.com, endless.com, myhabit.com, smallparts.com, or amazonwireless.com.
HomePrivacy PolicyTerms Of UseMarvel’s Iron Man VR – 10 Things You Need to KnowAnti Spam PolicyContact UsAffiliate DisclosureAmazon Affiliate DisclaimerDMCAMarvel’s Iron Man VR – 10 Things You Need to Know